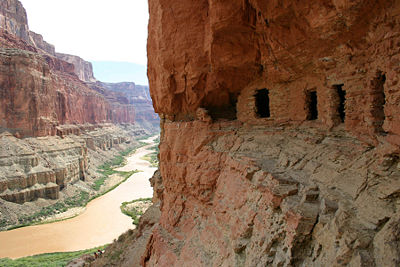 Grand Canyon appears to have been carved out by rapid erosion at a time when the sediment layers were still wet. When water saturated sand or sediment is flooded by deep water, for example from rapidly drained lakes, they typically form the kinds of formations which are found in Grand Canyon such as "theater-headed" (due to a process called "sapping"). Evidence of rapid formation indicates that Grand Canyon can be very young. Also the lack of eroded material (falling stones etc) at the foot of the steep walls is evidence for a young Canyon.

At present the erosion rate of the flowing water in the Colorado River at the bottom of the Canyon is fairly slow compared to what is actually possible. One reason for erosion being slow today in the area is that the relatively soft sediments are already cut through and eroded away and now the river bed often flows in solid and hard bedrock.

But even with the present relatively slow erosion rates the Grand Canyon cannot be very old. Earlier rate of erosion must have been much higher due to the fact that the sediment layers are more porous than the present bedrock at the bottom of the Canyon, and probably also more water was flowing through the Canyon, at least temporarily. For example in 1927 the erosion rates were measured to about 55 times (~23 million tons/day) higher than the average rate measured over a 25 year period (~0.5 million tons/day). Historic reality indicates that we cannot rely on only the average erosion rates measured today.

Creationist models hold that back in time Grand Canyon was rapidly eroded by post-flood erosion. Examples of possible rapid erosion are breaching of water dams, suggested to have been located to the north and east of Grand Canyon, from where spill water could have followed faults in the sediment. Erosion leaving obvious evidence of sapping behind could have occurred in water saturated sediment. A river flowing in such sediment would have produced very rapid erosion. The rapid carving out of Grand Canyon probably happened only some hundred years after the global flood. In a very short period of time the sediments (still being water saturated in many places) were rapidly eroded and deposited down streams the Colorado River (see for example Muddy Creek Formation and Bidahochi Formation and Bouse Formation).

The fact that we can observe so many typical sapping structures (as opposed to typical gully formations) strongly indicates a connection between the global flood (recent forming of wet sediments) and a recent and rapid erosion of that very sediment into what is now Grand Canyon.

Creationist flood models have often been severely misrepresented and ridiculed by opponents to interpretations of scientific data which seems to support biblical historic accounts, such as the global flood in the days of Noah. Opponents to rapid geological processes often support beliefs in long ages forming most of the geological formations which can be studied today, including sedimentary rock. Such beliefs are based on uniformitarian interpretations which assume that ancient erosion and deposition processes occurred with nearly the same rates as the present erosion rates.

One example of fierce and dishonest misrepresentation of creationist sources can be illustrated by a dispute over a passage in a book written by Dr Steven Austin[1]. In the book Dr Austin clearly suggested (on page 89) an example to illustrate the actual power of (seemingly) slow current erosion rates, by relating a measured rate of erosion to the volume of a well known geological formation which by most secular geologists is assumed to have taken very long time to form (Grand Canyon was suggested to illustrate the "volume" to erode, but it could have been any other eroded formation). However, in order to illustrate this imaginary case, Dr Austin suggested a comparison of how the current erosion rates of the [entire] Colorado River would (if concentrated to the Grand Canyon only) have the power to erode it (Grand Canyon) in only about 67 000 years. On page 89 Dr Austin presents this imaginary case with the following words:

"An illustration of the current rate of erosion in the Colorado River drainage basin can be seen in relation to the volume of Grand Canyon...".

And Dr Austin goes on to give more details specifying this imagined case of erosion:

"...If all the erosive power [of Colorado River] were concentrated within the Canyon, the time (T) to erode the Canyon at the average yearly rate would be:" ([comments] and emphasis mine).
<calculation follows>

This statement, and the calculation following it, have been misunderstood by some and even obviously misrepresented by others. It has been misinterpreted as saying that current erosion rates within the Grand Canyon gives a maximum age of the Grand Canyon of about 67 000 years, according to uniformitarian interpretation framework. However, Dr Austin doesn't say this. What Dr Austin actually says is what's quoted above. But as said, this passage has also been misrepresented. A certain Mr Glen R. Morton gives us an intricate example of ill-willed misrepresentation in a article published on the Internet named "Steve Austin's Grand Canyon Erosion Argument: A Mathematical Sleight of Hand"[2]. Mr Morton writes:

"Where does Steve go wrong? Well, it is in assuming that ALL the sediment carried by the Colorado River comes from the Canyon itself. Without his reader's knowing it, Steve is saying that absolutely no [sic!] erosion is occurring in Wyoming, Utah and Colorado, which, of course, is a bizarre claim to make if one were to make it explicitly. [well, Dr Austin really really doesn't claim that!] But by not mentioning this implicit assumption in his calculation [here Mr Morton is deliberately lying], those unfamiliar with the geologic facts will be fooled into thinking Steve has proven a short erosion time for the Grand Canyon." (emphasis mine)

Firstly, Dr Steven Austin obviously doesn't claim, or even give a vague impression, with this calculation, to have "proven a short erosion time" for the Grand Canyon. Secondly, Mr Morton obstinately repeats claims such as :

, and in so doing Mr Morton actually forcefully imposes his OWN strained misrepresentation on the text and the minds of his readers, even entirely denying the fact that Dr Austin actually DO mention that the erosion comes from the entire river (to the point of measure).

And Dr Austin's point was exactly that, namely to illustrate how much erosion the mentioned amounts of erosion actually represents, by imagining that this erosion be concentrated to the volume of Grand Canyon (implying a shrinking of the river range mentioned), and then calculating how long time it would take to erode this volume with the mentioned erosion rate! Note that Dr Austin wouldn't have had to be explicit about "concentrating" if it wasn't for trying to avoid giving a false impression to the reader of exactly that which Mr Morton accuses Dr Austin for! But Mr Morton seems to have decided to try to deliberately mislead the reader into overlooking this effort by Dr Austin to define his imagined case in crystal clear terms!

Moreover, Mr Morton tries to produce a screwed apprehension of Dr Austin by associating him with distasteful words and claims. Mr Morton utters things like "bizarre claims" about claims which Dr Austin never made(!), and then Mr Morton makes a lame attempt to cover this dirty trick by ending the sentence with an "if such a claim had been explicitly made"! Such spooky tricks is outright evil of Mr Morton, and a deliberate ill-will against Dr Austin is exposed in the fact that such tactics tends to produce only distaste, antipathy and uneasy feelings in the minds of the readers, while not providing any substantial supportive facts.

It is shocking to discover how outright maliciously Mr Morton is lying in order to make up this distasteful misrepresentation of the quoted passage in Dr Austin's book.

In his book Dr Austin makes it crystal clear that the river included erosion also from parts of the river above the Canyon. Therefore only a person with an obviously dishonest intent would accuse Dr Austin for claiming exactly the opposite of just that!

Again, despite the fact that Dr Austin two times explicitly makes clear exactly that which Mr Morton accuses him of hiding (see Dr Austin's own wording again), the former young earth creationist Mr Glen R. Morton ill-willingly and obviously deliberately misrepresents Dr Austin in that he's ascribing Dr Austin exactly such claims which he obviously didn't claim. And when Dr Austin tries to be very clear (two times pointing out that he meant the erosion of the Colorado River up to the measure point), then Mr Morton blatantly accuses Dr Austin of hiding just that!

And finally, after deliberately misrepresenting Dr Austin, Mr Morton goes on to "debunk" the false fabricated claims which Mr Morton made up himself (see Mr Morton's full article in the reference section below). But by careful reading of the clear text (compare the bold typed text above) it becomes crystal clear that Mr Morton has only "debunked" his own straw man, namely that which he made up using deliberate distasteful lies.

So what DOES Dr Austin claim?

For many years Mr Morton has had the chance to check the source carefully (page 89 in Dr Austin's book[1]) and correct his misrepresentation of Dr Austin’s claims. Also others, including creationists, have misunderstood the quoted passage of Dr Austin, but it should be clear by now that misinterpretation, deliberate or not (for example due to careless reading of the source) isn't enough to "debunk" or even criticize Dr Austin for something he has never claimed.

Having said this, it is very clear from the context in Dr Austin's book, that he supports notions about very rapid erosion rates in the past, even magnitudes higher rates of erosion than discussed above, and in his book he explains why this is the most plausible explanation of recorded scientific data. And most important, Dr Austin is NOT hiding away any assumptions behind his calculations, instead it is the very message of the book to expose exactly those assumptions - namely that a Biblical flood, with subsequent local catastrophes, would have had the capacity to erode the entire area of Grand Canyon in only a few days, week, months or years. Such a claim would not be misrepresenting what Dr Austin suggests in his book.